Twenty minutes across the border from Chester into semi-rural North Wales sits the Black Lion pub in Buckley, Flintshire. A hub of the local community, the wet-led pub (meaning it’s known as a watering hole, rather than primarily for food and drink) is deceptively quaint from the outside. When you step inside, things get distinctly more up to date and, out back, a timber beer garden strung with fairy lights welcomes guests who want to socialise al fresco.

On 20th March 2020, things changed dramatically for the Black Lion, as the Prime Minister announced closure of all pubs in the UK. Since then, the pub re-opened again over summer and is now, once again, closed and eagerly awaiting the proposed re-opening date of 12th April so things can get back to normal.

“We’re now in our third lockdown,” landlord Mark Thomas tells us. “But throughout this period, we’ve still engaged with our community and kept in contact with our regulars to let them know they’re not alone.”

It’s quite the selfless approach and one that should be applauded. Because that community engagement hasn’t been a case of simply saying hello to the locals in the street or dropping them a text message. No, the staff of the Black Lion have gone much further than that. In an effort to keep community spirits high, the pub launched what it calls the Community Heroes scheme for deserving causes. 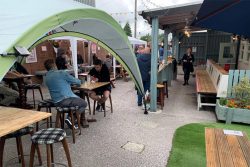 The first of its fundraising efforts has been to create a sensory garden for two children in the Buckley area who live with a rare condition called oculocutaneous albinism, which is characterised by a significant reduction of melanin in the eyes that impairs the children’s vision dramatically.

The team organised a sponsored walk that took them from the Black Lion pub all the way to the summit of Moel Famau, the highest hill in the Clwydian Range and the uppermost point in the county of Flintshire. As well as getting sponsorships in advance, they carried buckets with them on the walk, taking donations from passers-by along the way.

“We walked over 14 miles from our pub to raise money for the sensory garden and raised over £2,000,” Mark tells us proudly.

As a business leader with a background in retail (he was the Store Manager at The Range for four years), Mark knows the value of great community relationships. It’s a symbiotic process whereby the Black Lion team is able to do something for those who keep the pub thriving, even during this challenging period. 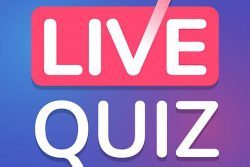 But it’s not just good deeds that’s helping to keep the Black Lion spirit alive. The pub’s team is highly active on social media, hosting live quizzes and posting fun videos, and they’ve even redecorated the pub during lockdown, all the while offering a knockout Sunday dinner takeaway, which has seen them taking repeat orders from hungry guests! When they re-open, Mark is confident that the community will feel as bonded to the Pub as they ever have.

“Whilst it’s tough at present, positive thinking that we’re going to reopen is what’s getting us through,” he says. “We welcome guests into our pub – which is also our home – as if they were family. They give us great feedback, telling us how the Black Lion has come full circle, from a backstreet boozer to the place to be.” 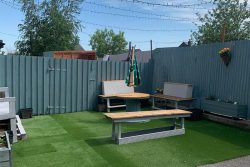 There’s a confidence about him; an unflappable sense that things are going to get better. And, whilst he’s not shy about crediting his own hard work (“My Area Operations Manager calls me his ‘entrepreneur,’” he tells us), he’s also very quick to acknowledge the role of Marston’s in enabling him to achieve his dream of running his own pub.

“I looked into most pub companies when I was thinking of opening a place,” Mark says, “and Marston’s was, by far, the best. The training you’re given before you even set foot in your pub is above and beyond the rest. With key contacts across the estate, a question will never go unanswered.”

We wonder how he feels about his choice to go self-employed and become a pub landlord now, in the light of all that’s happened. Is it everything he thought it was going to be? If so, what’s the secret to maintaining such a positive spirit when everything around him is in such a precarious state? 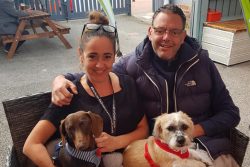 “It’s great,” he says without hesitation. “Being your own boss but with Marston’s guidance? I’m very lucky… lucky to have such a good Area Operations Manager and Regional Operations Manager. Lucky to have such great locals and my team. The people make the place, after all. That’s why we strive for excellence in everything we do at the Black Lion.”

Find out more about Mark and the Black Lion team on the pub’s own Facebook page.

To find out more about becoming a Marston’s Pub Partner, visit our dedicated careers page.

Want something else to read? Check out another of our COVID Case Studies with The Wishing Well in Bristol.